There is one thing that is always true: never discuss politics or religion. It’s hard to do that with what I’m going to discuss for a bit – but I promise there’s a method to my madness and I’ll tie computers in later …

I’m over here in Europe before SQLBits X. Last year I went to Germany (Stuttgart) and Amsterdam for the first time before and after SQLBits VIII. I’m very thankful I was accepted and will be back for SQLBits X, so I started thinking of where I could go this year. Paris was a candidate, but I decided to go the road less traveled: Munich. Sure, Paris would have meant Disneyland and it would have checked that box off (and also it would mean the only Disney park I wouldn’t have visited since December would be Hong Kong Disneyland – but I have been there), but I’ll do that another time.

Anyone who knows me is aware I am not ashamed of who I am in any way – including my religion. I don’t wear it on my sleeve or tattoo it anywhere (that is a no-no anyway), but it is part of me. Ever since I was knee high to a grasshopper, I can remember studying and reading about the Holocaust (the Shoah for those who hate the former term). I’ve seen way too many documentaries, read hundreds – if not thousands – of books and articles in 30 or so years. But one thing I always wanted to do deep down was visit a concentration camp. Now, this is not like visiting Disneyland (one of my favorite places on Earth) – you can’t just say, “Let’s go!” You really need to think about it and be in the right frame of mind.

When I went to Stuttgart last year, I saw that it was too far to just do a jaunt over to Munich. This year, I decided to do what I’ve said I would do for at least 10 or 15 years. Especially after the death of my friend Mike, I am of the opinion you need to follow your heart. It was time for me to go.

By the way, my heritage is important to me, but anyone with half a brain knows that many different groups perished at the hands of the Nazis in World War II (as well as the years leading up to it). Gays, the mentally handicapped (is that even the PC word these days? sorry if I offended – I mean no disrespect), the sick, many clergy, other political parties, Gypsies … you name it, they were probably represented. It wasn’t just the Jews, but they were #1 on the list.

Dachau was the first concentration camp, and arguably the easiest to visit (at least for me). It’s located just outside of Munich. As I rode the train from Munich to Dachau (it’s an actual town, not just a concentration camp), you see what you think of Europe: beautiful countrysides. Cute little homes. The town of Dachau itself is one of those right out of a postcard when you think of Germany. It made me wonder what the people who were transported there were thinking on their ride … but they were certainly not going on a vacation. The fact of the matter is that 70 years ago, I would have been sent there for the same reason others were. That’s sobering, isn’t it?

Situated right next to Dachau are some homes. It’s bizarre. Yes, I know it’s nearly 70 years since WW II ended, but still … 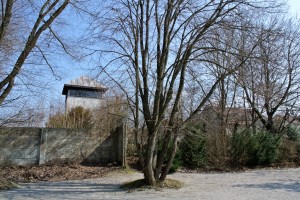 Homes on the right, concentration camp on the left

As you approach Dachau, there’s an eerie stillness. That stillness stayed with me my entire vist. Sure, you hear birds chriping but it’s a feeling and sound of near silence you can’t describe. Once you enter through the now-famous gate pictured below, you’re transported into a different world and time. Someone said to me that the picture was wrong because he had always imagined a concentration camp to be a “black and white” place that was absent of color, so the picture made no sense to him. I thought about it and he’s right – we’ve all seen B&W photos and news footage from the 30s and 40s, but seeing it in color is a very jarring experience. 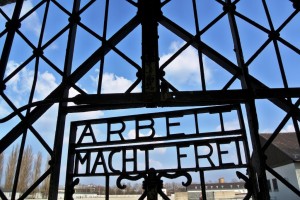 I’m not going to talk much more about the experience, because I’m sure you can guess how it went. Seeing the places where many unknown are buried (or their ashes),being able to walk into the gas chamber, and see the crematorium are experiences that will stick with me forever. The dichotomy of the beauty of the surroundings vs. what happened  there is hard to understand. My only real political comment for the day: anyone in the area HAD to know what was going on when the camp was active. It would have been impossible not to.

Three other comments before I get to my point: 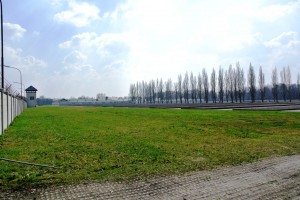 View from the corner

Anyway, my point here is that this is a subject I know well, but the reality of it is much different when you’re there. It’s real. It’s visceral. I prepared myself as much as I could since I was a kid, but seeing things like the gas chambers up close and in person is WAY different than seeing a picture in a book, reading how the Nazis came to that method of efficiency, etc. As you’re standing in the chamber (which they put a light in, but I can imagine not much light was there when people were herded in), you can picture how it was. How people suffered. Pictures can tell a story, but there’s nothing that matches the experience.

I can say the same for my career in IT and with things like SQL Server and databases. I never assume, and that has put me in good standing, but too many people assume that reading, say, a whitepaper and actual experience are the same. They are not. There have been times in my career I’ve been pleasantly surprised by my experiences and preparation, and other times you realized that what you have done is woefully inadequate.

Reality is sometimes a swift kick in the pants. You want to be pleasantly surprised more than not both in life and in your job. Put yourself in a position where that happens.

Since we’re all computer geeks, I highly recommend Edwin Black’s book IBM and the Holocaust. It explains a lot of how the Nazis were able to do what they did, and is an interesting take on technology.

And with that, I will just say this: it’s experiences like what I did today that really puts life and work in perspective. If you ever get the chance to go to a concentration camp, don’t be scared to go. Is it heavy? Yes. Will you be sad at times? Probably. But that’s how it should be. Not everything needs to be shiny and happy. (Another lesson you can take away as well – the happy marketing message is rarely our reality in IT :)).