If you haven’t heard, Windows Server 2012 R2, System Center 2012 R2, and SQL Server 2014 CTP1 have hit both MSDN and TechNet for download. One of the new features of SQL Server 2014 is that you can now use a Cluster Shared Volume (CSV) in addition to the other methods you already could use for database and backup storage (drive letter, mount point, SMB share, local tempdb – the last two were introduced in SQL Server 2012).

What is a CSV you may ask? Well, it’s a way to configure a single shared disk that is presented to and can be used by all nodes of a Windows Server failover cluster (WSFC) – a true shared disk. CSVs have been used with Hyper-V and virtual machines (VMs) for years. Why should you care about CSVs? It makes provisioning storage much easier. This is essentially the old PolyServe scenario where you had a shared filesystem for all of your instances. Prior to SQL Server 2014, all of the storage options (except for SMB) required that the storage was dedicated to a single instance, so each time you had to configure a FCI, you needed to get storage provisioned. Well, with SQL Server 2014 if you decide to use a CSV for all of your FCI installations on a single WSFC, you only have to allocate storage once. A CSV looks like Figure 1 in Failover Cluster Manager.

In Windows, a CSV is presented like it is a local disk, but it really isn’t; it’s a shared disk in the WSFC. Figure 2 shows what it looks like, which is a “pointer” to  the shared disk.

When you are configuring the FCI to use a CSV, you will select the CSV configured in the WSFC as the disk as shown in Figure 3. 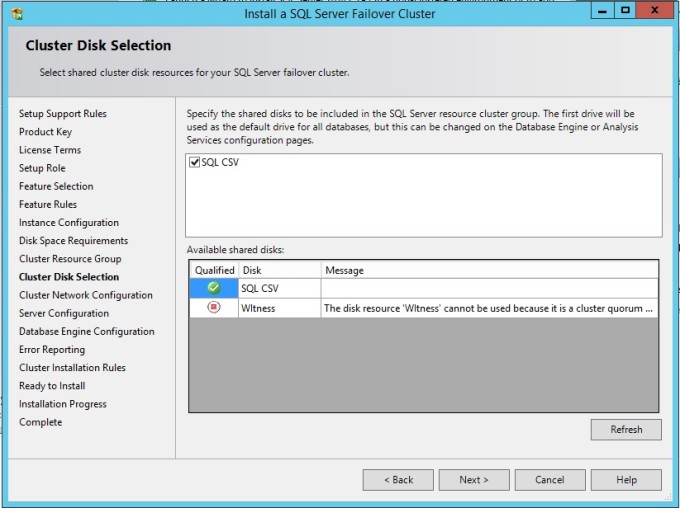 Figure 3. Selecting the CSV in Setup

The key part comes later: the Data Directories tab as shown in Figure 4. This is where you’re going to have to think. To ensure each FCI on the WSFC is different, each one will get its own unique directory on the CSV. I recommend you come up with a naming convention that works. 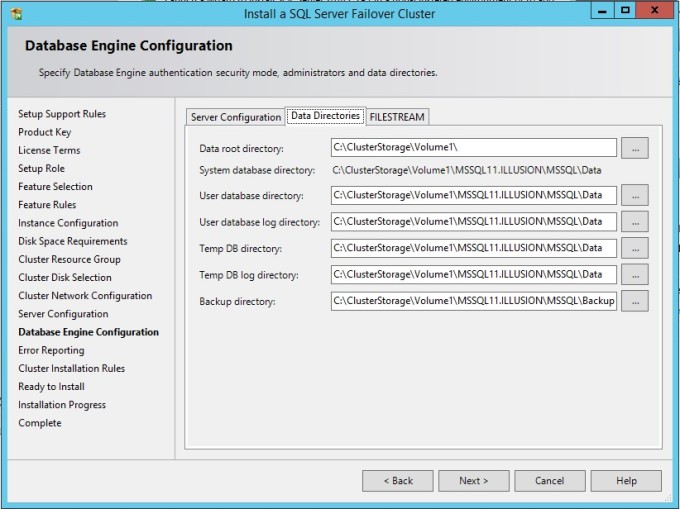 Figure 5 shows what things look like if you were to navigate there in Windows. 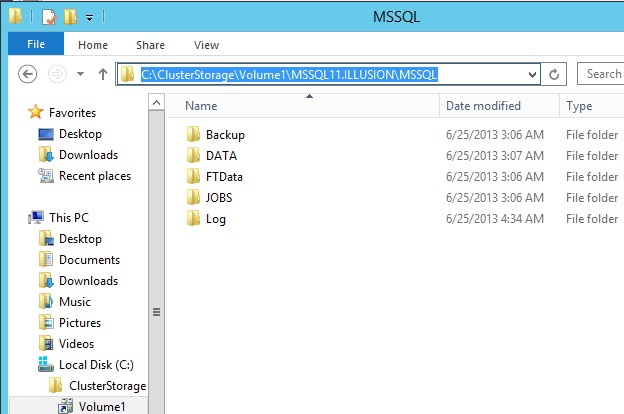 The instance will look similar to one you would have configured if you used SMB – no shared disk shows up as shown in Figure 6. 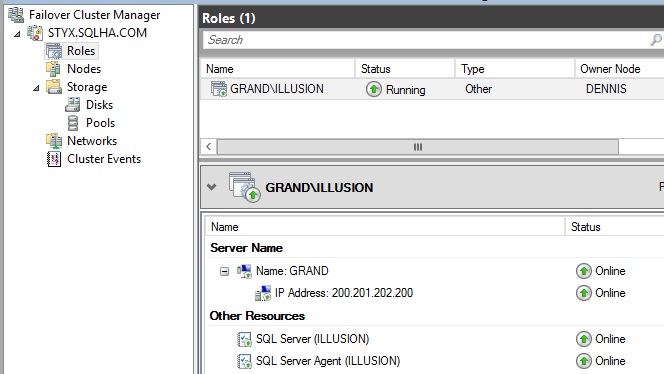 This is just a quick glimpse into one of the new – and in my opinion – great options new to SQL Server 2014 that some of us have been hoping would be enabled for awhile. More on this scenario will be covered in detail in my upcoming book.