Back in 2013, I decided that no matter what laptop I had, in some ways it would be better to have a small, light, portable machine that I could take with me to be more of an uber-VM box. That way, my laptop could always be small/light or I could have VMs running in both. I mean, I can be running 10 – 15 VMs at any given time.

It would also allow me to do things like, say, run VMware Workstation on my laptop but Hyper-V on the small machine. Since I started doing this, others have picked up and run with this idea as well. It’s not uncommon for people to use these kinds of setups now, whereas when I started, I was basically the only one. My setup has recently changed, so I figured I’d discuss what I’m doing now and give a bit of history of how much things have changed in a relatively short time.

When I decided to do this, the initial Intel Next Unit of Computing (NUC) machines were a bit underpowered for my liking. I initially ordered the DC3217IYE NUC, but it’s i3 was not up to the task – it was more the design than the i3 as I have run VMs on equivalent processors. For Version One of my small but portable VM box, I settled on the Foxconn NanoPC AT-7700. It had:

This worked fairly well. For the barebones machine with no memory or SSD, I paid just under $500 US (since I get readers from all over the world). Being a U processor, it wasn’t always the snappiest configuration nor the coolest (yay fans), but it was a good foray into this type of setup.  At that time, 16GB of memory cost me $100.

Fast forward to July 2014, and the “you must power your device on” rule  which is still in effect when flying internationally.For what it’s worth, it’s real. I was selected for a random check at London Heathrow prior to a flight back last year. This was post-security right down by the entrance to the plane.  Why is this date/event significant? Just prior to that, I purchased the Gigabyte Brix GB-BXi7-4770R I was going to take over to use while speaking. That didn’t happen, but I did use the Brix at home. So in a year I went from a U processor to:

I think I paid $600 – $650 for it. The Brix is a hefty little thing, and while powerful, has its share of issues in my opinion. The fan is nearly always on (granted, I push these boxes), and running a server OS is no picnic. To be perfectly honest, the general problem with these setups is this: if you want to run a server OS such as Windows Server 2012 R2, driver support is non-existent or trial-by-error to get certain things to work. The last time I was using the Brix a graphics update nearly broke it. Ultimately, it’s not the best choice – especially today.

What all this meant was I needed to maintain a 16GB-based laptop which I was fine with as my main portable. Since I couldn’t take these with me, they became extra home virtualization/lab boxes. The Vaio Z Canvas I got in June of 2015 (which has the i7-4770HQ) is the best portable box/laptop I’ve ever had, and I’m hoping they do an update.

Fast forward to now. As I inevitably do, I push limits and 16GB is becoming less tenable for a configuration for testing and demoing. Again, I love my Z Canvas – it never gets hot nor do I ever hear the fan (except when updating Windows …). I also have more and more of a need to have a dual Hyper-V/VMware setup for various reasons. Running Hyper-V under VMware is possible, but not the best configuration. This configuration would never be my main portable VM box, but due to some customer work and what I need to finish the book over the next little bit, I needed something. Its first public debut will be for tomorrow’s 24 Hours of PASS – Summit Preview Edition where I will be doing the session “A Closer Look at Distributed Availability Groups” at 17:00 GMT (1PM Eastern/10 AM Pacific).

Enter the new Intel NUC – the NUC6i7KYK. Instead of just shipping less powered NUCs, Intel decided to ship a full blown one. First and foremost, it supports Windows Server 2012 R2 with its drivers, which is a huge selling point if you want to have a home lab and want to run something like Hyper-V not in the desktop OS. you can do things like Shared VHDX which simplifies FCI configurations (but also complicates and can cause other issues that are fixed in Windows Server 2016). A few weeks back, I picked one up. It’s configured with:

I wanted instant gratification, so I got mine at my local MicroCenter for $599. As of today, it’s $569.99 on Amazon. Talk about how far we’ve come! The new NUC is very light without the AC adapter/power brick. It ships with the skull cover which is not exactly my taste, and they include a plain one and a tool to change it, so I did. As you can see in Figure 1, it’s just slightly longer than a DVD and not much thicker than it.

Most people may be used to either more standard 2.5″ drives (SSD or HDD) or mSATA. This NUC only takes SSDs which have the M.2 form factor. An M.2 SSD looks similar to a stick of gum. Figure 2 shows what one looks like. For this build, I decided to go all out. I got what is the top of the line right now. These are not your normal M.2 drives. Sure, I could have “cheaped out” and purchased something like two Samsung Evo 850 1TB which are only about $350, and it would have been fine.. 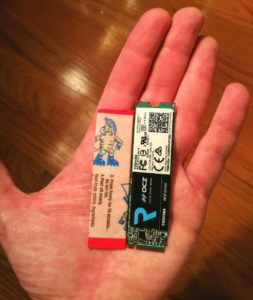 I know there are some of you out there (including Max who is my business partner) who prefer to build PCs and pick things like power supply, case, etc. I am not that guy. I’ve done it, but I don’t geek out on that stuff. With this NUC, you unscrew the bottom, pop in the memory and drives, and away you go. Figure 3 shows what the NUC looks like with everything installed. I can’t say enough about how easy it is to get up and running with this. 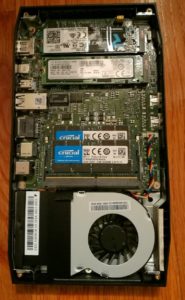 Figure 3. Inside the NUC6i7KYK

I’ve set this up with one drive running Windows 10 with VMware Workstation 12, and the other running Windows Server 2012 R2. Again, thanks to Intel for supporting Windows Server 2012 R2 with drivers for the NUC. I did try to use Windows Server 2016 Technical Preview 5, but had driver issues (even when I tried to upgrade from Windows Server 2012), so I will wait until it is fully supported by Intel. This has been MUCH easier than the Brix and I’ve had no stability issues. Intel’s BIOS utility is also well thought out. You will want to make sure that the CPU power saving setting is disabled (it is on by default) if you want the best performance. Like my Z Canvas, Intel did a wonderful job with system design. I rarely hear the fan and it stays very cool even when running quite a few VMs.

So if you’re building a new lab or even want a new home PC (even if it’s just for music or watching video), I think you can’t beat the new Intel NUC6i7KYK. You don’t have to load yours up like I did with top-of-the-line SSDs and 32GB of memory, but for about $1000, you will have something very powerful and for equivalent money, we’ve come a long way since 2013 and Version 1. Because I can travel with it in the US, it may come with me to PASS Summit but we’ll see … it’s too soon to tell.