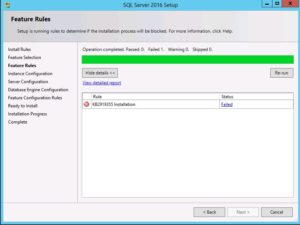 The new standalone SQL Server Management Studio installation has the same issue – it cannot be installed without KB2919355 installed as seen in Figure 2. 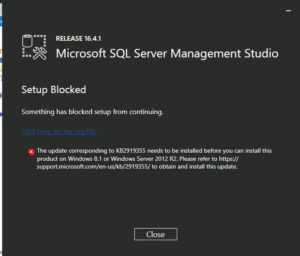 In my case, I created a new VM with a fresh installation of Windows Server 2012 R2. I also ran Windows Update to ensure it had everything Windows Server thought it required. Figure 3 reflects this status. 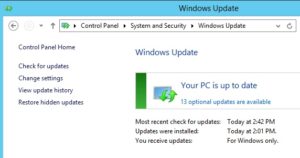 Figure 3. Windows is up to date

As you can see in Figure 4, KB2919355 is not listed as one of the ones WU installed, so it has to be an optional update. 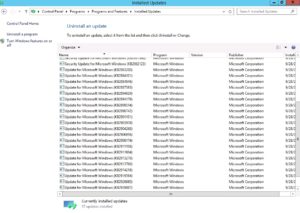 Looking at the list of optional updates in Windows Update in Figure 5, 2919355 is not shown. This means you need to download and install it manually. 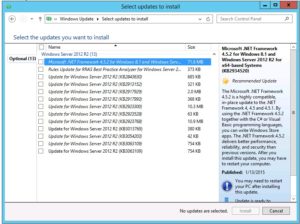 I went to the KB article page for 2919355 (link is below) and clicked on the link for the Windows Server 2012 R2 files and downloaded all of them. I did not look at the installation instructions (note: don’t ever do this … updates are fussy and why I am writing this blog post) and plowed head installing the executable associated with KB2919355. Cue the sad trombone sound as seen in Figure 6.

Going back and looking at the instructions, buried in the last step is what I lovingly call an “oh by the way” – you have to install KB2919442 (also not shown as an optional update in WU) first. Once you do that, things are smooth sailing.

So to install SQL Server 2016 on Windows Server 2012 R2, here is the installation order for these fixes:

If you are still having issues, you’ve got other problems going on that you will need to investigate. Hope this saves some of you some time.

Note that if you are using Windows Server 2016, you will not encounter this issue. Everything just works. If you want to take advantage of Windows Server 2016 with SQL Server 2016, contact us – we can help get you up and running with features such as Storage Spaces Direct which I blogged about a few days ago and SQL Server just officially announced support for at Ignite.